In California’s Orange County, a modern house with a kinetic facade—it looks like glass from one angle and stone from another—is coming on the market for $50 million.

The property spans around 13.5 acres in Laguna Niguel, a hillside city about halfway between Los Angeles and San Diego. The home is owned by Gary Dinkin, 61, founder of gift-card platform SmartClixx, and his wife, Lindy Dinkin, 60, who was a principal at the company. Mr. Dinkin, who sold SmartClixx and is now retired, said they finished building the six-bedroom home in 2017 and are selling because it turned out to be too big for their lifestyle.

The approximately 14,500-square-foot house was also built for entertaining—something Mr. Dinkin said they envisioned but never did. “I’m a software guy, I’m almost antisocial,” he added.

The property is located in Bear Brand Ranch, a gated community with around 125 home sites, said Mr. Dinkin. The Dinkins, who have two grown daughters and had been living in Florida, drove up and down the California coast until they found a spot to build their home, he said. They paid $2.5 million for the vacant land in 2013, records show.

Sitting behind a custom steel-and-glass gate designed by Mrs. Dinkin, the house has ocean views from nearly every room. The house also has limestone floors, an attached 8-car garage, and deck and patio space totaling about 3,000 square feet, according to the listing. The grounds include two putting greens and a pool.

Mr. Dinkin said the couple had such a strong vision for the house that they cycled through three architects. “In the end, the structural engineer was the one who worked with me directly and we got what we wanted,” he said. All of the rooms are oriented to the ocean, said Mrs. Dinkin, and instead of pillars that would have blocked their views, the house cantilevers in the back over a patio area. The ceilings are “tricked out” with an array of shapes, including two hearts in the ceiling of the breakfast nook. “I love my wife,” said Mr. Dinkin, by way of explanation. The library ceiling has interconnected triangles, one for each member of their family including two dogs.

The front of the house was inspired by the artist Yaakov Agam, who is known for his three-dimensional paintings and sculptures. The facade—made of 17-foot-tall windows and Italian porcelain—looks like glass as you approach and stone as you drive away, Mr. Dinkin said.

The geometric influence extends throughout the property. Diagonal columns support the porte-cochere, and an angular outdoor swimming pool has an octagonal fire pit in the center, accessible via a glass bridge.

To let in natural light, the house has oversize windows and pocket doors that open to the outside. There are about 14 skylights in the entryway, which has a soaring 27-foot ceiling. The front door is an iron-and-glass pivot door wide enough for a car to drive through, Mr. Dinkin said.

The Dinkins declined to say how much the house cost to build, though Mrs. Dinkin said it was a “lot more than we thought,” in part because their plans for it grew over time.

A lower-level game room has a pool table and pinball machine. Mrs. Dinkin had a hand in designing rugs and furniture throughout the house, including a stainless-steel dining table lighted from underneath with LED lighting. Furniture and art in the home could be included in the sale if a buyer wants it, the Dinkins said. “Everything is negotiable,” Mr. Dinkin said. 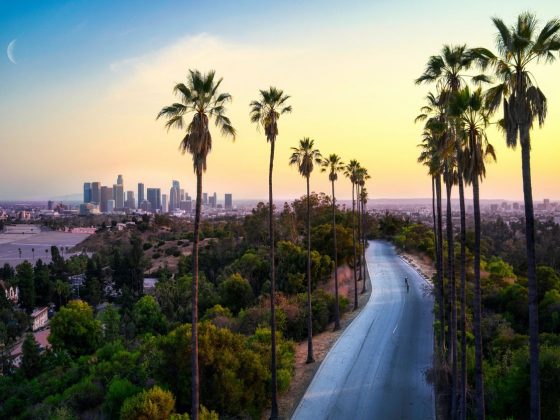 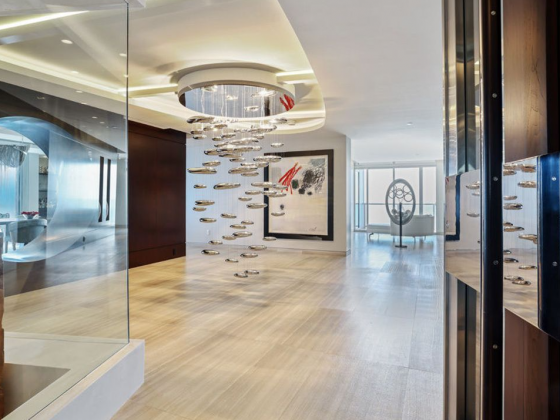