A more than 500-year-old mansion in the U.K. that was dismantled, relocated and rebuilt 70 miles away from its original homesite, came onto the market Wednesday for £12.95 million (US$17.5 million).

The spread was originally constructed for a wealthy salt merchant on the banks of the River Colne, in the Essex town of Colchester—widely considered to be Britain’s oldest recorded town—in the 1480s.

Some 400 years later in 1910, it was bought for £350 by an eccentric antiquarian. He would go on to pay £30,000—almost 100-times the purchase price and equal to roughly £3.76 million today—to have the home dismantled brick-by-brick and transported to a plot of land that he owned in Kingston-upon-Thames, where the 12-bedroom home was carefully reconstructed, according to listing agency Rokstone.

“Buyers are often drawn to a property because of its history, character and narrative, as well as its aesthetic appeal and the practicalities, such as size and location,” Becky Fatemi, founder and managing director of Rokstone, said in a statement.

“The backstory here is fascinating, but it also has the rigor of being built twice and extensively refurbished very recently, so it really does stand the test of time in so many ways,” she said.

Spanning three floors and 14,447 square feet, the property is entered through a heavy front door that opens into a vaulted hallway with stone walls, low timber beams, wood paneling and a stained-glass window.

The seven-bedroom home is “both whimsical and practical,” and is loaded with original features that have been “meticulously maintained and cherished,” according to Rokstone.

There are hunting motifs of animals on the walls; intricately carved wooden details; embossed, hand-painted crests; and original fireplaces.

Overall, the recent refurbishment is sensitive to the overall style and period of the house, the brokerage said. But the kitchen-dining-family room has been modernized to suit contemporary London living with marble countertops and sleek units.

“The timing of this impressive mansion coming to market is significant. After the first two years of the pandemic, we are seeing a return in demand to live within Greater London but there is still a focus from buyers on achieving as much indoor and outdoor space as possible which invariably takes them into the leafy super suburbs,” Ms. Fatemi said.

“This will tick all the boxes for a high-net-worth family who want to buy the ultimate trophy home,” she added. 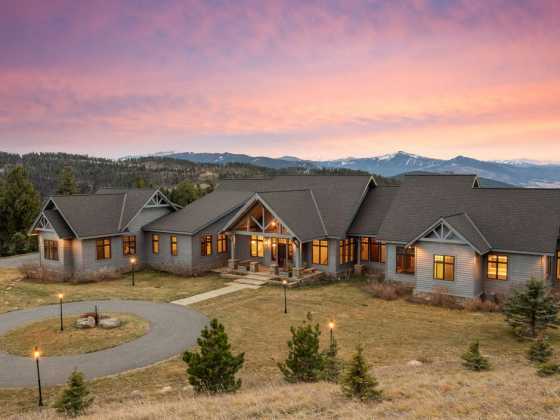